Verea, a company from A Coruña, has begun to place the roof of a luxury hotel in an emblematic building of the historic district of Panama City, a construction promoted by a New York investor. This place was a the playground of the military elite, and the place where Manuel Noriega and the Panamanian upper class celebrated their parties. The select Union Club, in the old town, had already deteriorated for decades. Vegetation and debris had taken over this centennial building, with bare walls and pillars in sight, as if it were a decaying corpse. Its ruins even served as a backdrop for the filming of James Bond films.

Today it represent one of the great challenges for the restoration of a district that Unesco declared Wold Heritage Site in 1997. Paul Stallings, a New York businessman, is the one who leads the project to convert that emblematic building into a five-star hotel. The company  in charge of the roof is Verea, located in Mesía (A Coruña), which manufactures 50 million tiles a year. The galician company works in Central America with a local distributor. «The construction is now halfway though its execution», explains Luis Verea, director of the company that his father founded more than half a century ago.

Since last summer, Verea has managed to enter Panamá and five other US states: Texas, Luisiana, Misisipi, Alabama and Georgia, which is a step in the conquest of a gigantic market, where the Galician tile is an appreciated product and synonymous with quality building. The Mesía company had already achieved a good position in Florida; in fact, 60% of the units that are placed on decks are manufactured by Verea. An area that not only demands this product for buildings and homes of high economic value, but for public projects, such as schools or nurseries. 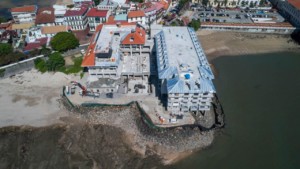 On the edge of the precipice

Since setting foot in Florida in 2008, Verea has not stopped growing. A landing that coincided with the beginning of the real estate crisis in Spain, which collapsed the internet construction market, and that put this business on the edge of the precipice. Like many other companies, the jump abroad saved them. Verea already export more than half of what it produces in the Coruña municipality of Mesía. But that international success is due to innovation and the manufacture of a product of the highest quality, recognized internationally.

«In recent years, we have introduced changes in the production process; we implement modern cooking and drying processes that have given us a ceramic tile much more resistant to thermal and physical changes, and we have better selected clays, from our own quarries», explains Luis Verea, general director of the company. «Now we cook the tiles to more than a thousand degrees, which gives us a product that absorbs less water and that resists frost and low temperatures much better», he says.

These qualities are what made the company of Mesía the chosen one to place the roof of the Four Seasons Disney Hotel in Orlando, among other projects. The Galician firm develops its industrial activity in a complex of 300,000 square meters, where it employs sixty workers. The conquest of the foreign market has allowed it to increase its turnover to 10.3 million euros.

Verea contributes with the ALEPOH project